Twenty-five years ago, Air Force and Goodfellow civilian service veterans and good friends, Robert Thomas “Tom” Brady and Jim Delheimer retired and immediately organized a weekly breakfast group meeting at the Cactus Hotel in downtown San Angelo. They extended the group informal membership invitation to others with like-minded interests and Goodfellow experiences. They are a great group of veteran friends.

It’s reported that Tom Brady unilaterally decided the group would be known as the Goodfellow Order Of Benevolent Retirees and Spouses or GOOBERS. The GOOBERS met regularly at the Cactus Hotel until eventually moving to breakfast at Kenny Blanek’s Village Café and Catering restaurant located on West Beauregard Avenue. Blanek’s closed their dine-in service about a year ago and the GOOBERS moved their breakfast get-together to Mr T’s Deli located in the Santa Rita neighborhood on West Avenue J and South Park Street.

Several GOOBERS are also members of American Legion Post 572. These Legionnaires noticed that the flag and staff mounted on the front of Mr T’s needed some maintenance and volunteered to provide the needed materials…and do the work too.

Retired US Army CSM Jeff Meurer, Commander of American Legion Post 572, coordinated with Mr T’s employees Rigoberto Flores and Melinda Luna to get the project completed. Rigoberto is a USMC veteran. He attained the rank of Sergeant (E-5) during his service in Recon from 1999-2001. Melinda served on active duty in the Army from 2000-2005 and in the Reserves until 2007. She also attained the rank of Sergeant (E-5) during her service as a piccolo and flute player in the Army Band. Both veteran employees actively supported this flag project and assisted in mounting and posting the new flag after making and serving the GOOBERS breakfast on Wednesday, September 8th. They are interested in becoming members of Post 572 which the Commander and Adjutant will take care of in short order.

American Legion Post 572 and Mr T’s employees and patrons extend their thanks and appreciation to Mr T’s new owner, Chef Daniel Friedrich, for supporting this Americanism project in flag etiquette and protocol. We wish you all the best in Mr T's Deli operations.

Below are photos that were taken by John Frost and Cindy Willey during the flag replacement event. For more information about the GOOBERS, contact Tom Brady at email ro3639@aol.com. The American Legion Post 572 can be contacted at info@txlegion572.org. 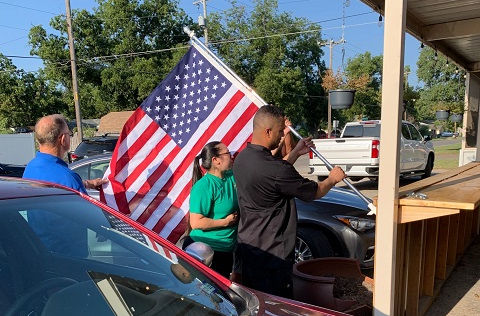 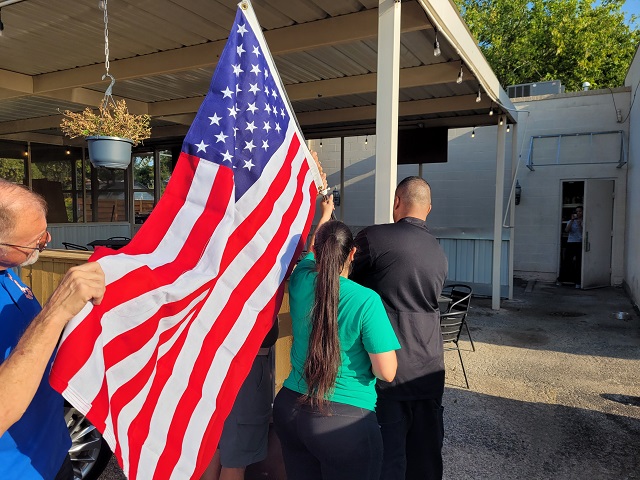 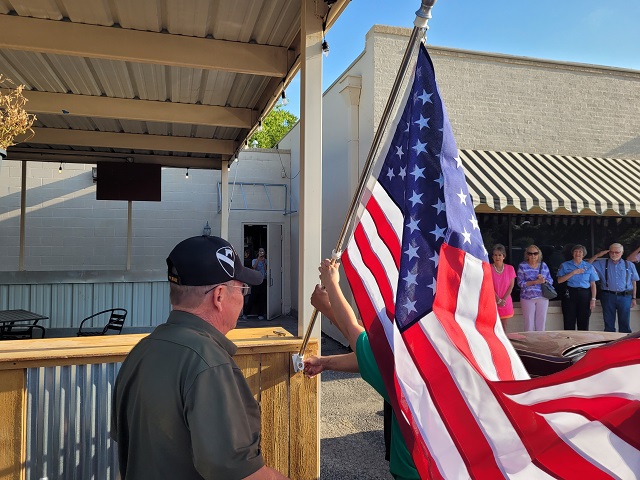 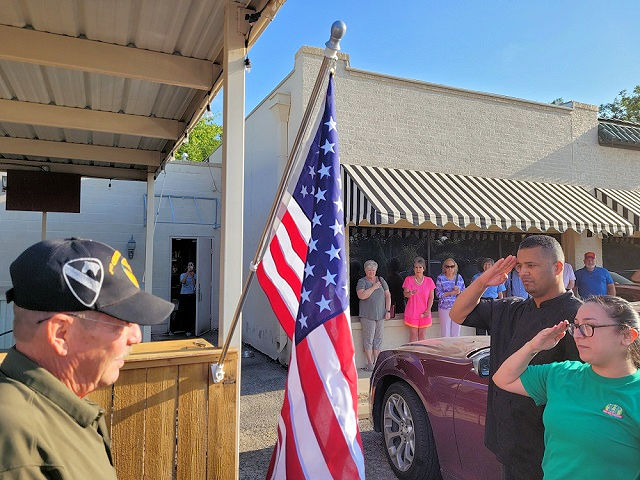 Above left: On behalf of the GOOBERS and Post 572, Commander Jeff
Meurer provided the materials for this new flag display.

Above right: Melinda and Rigoberto render a hand-salute to complete
the installation as members of the GOOBERS breakfast club in
the background pay respect to the flag. 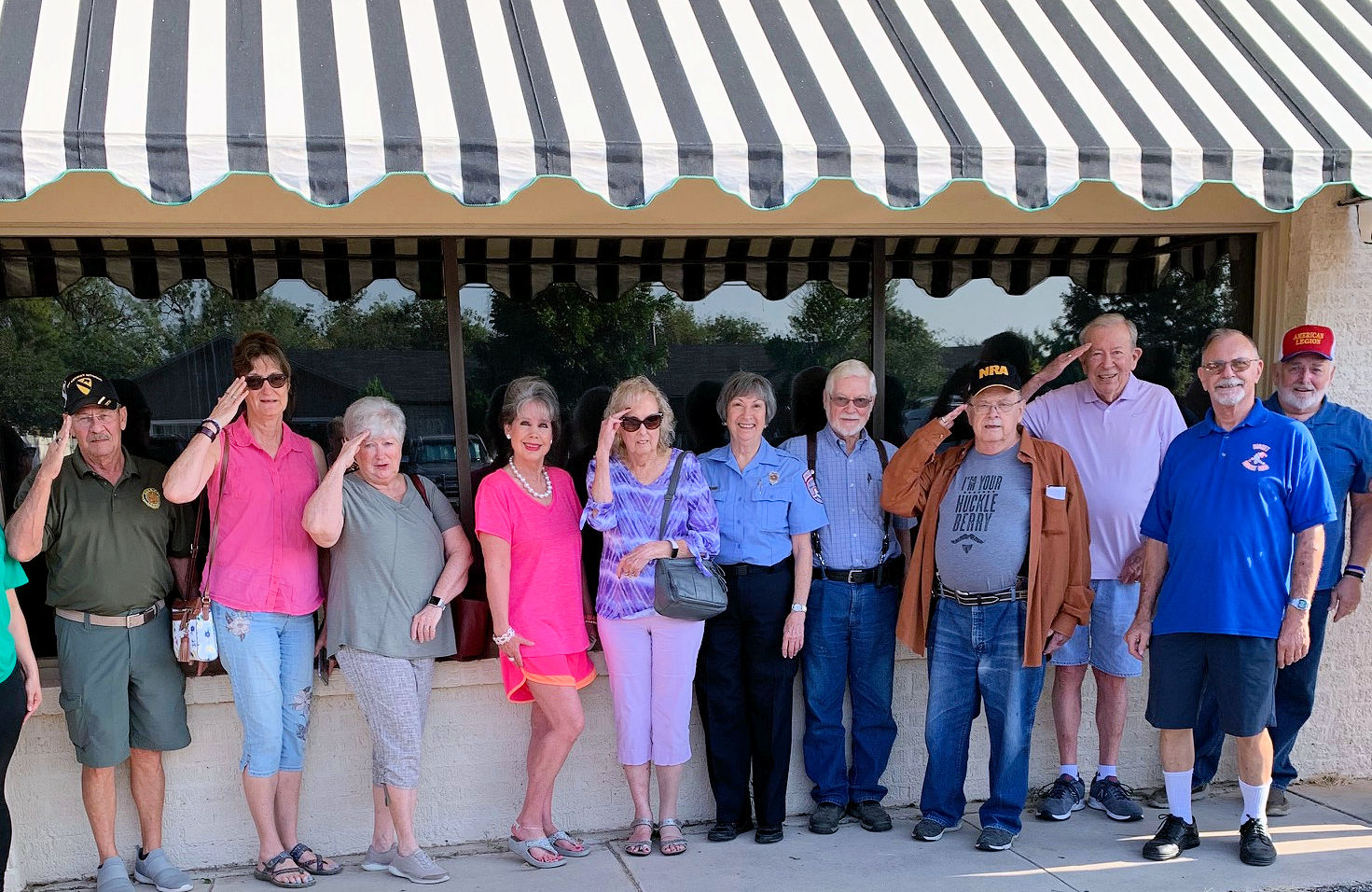 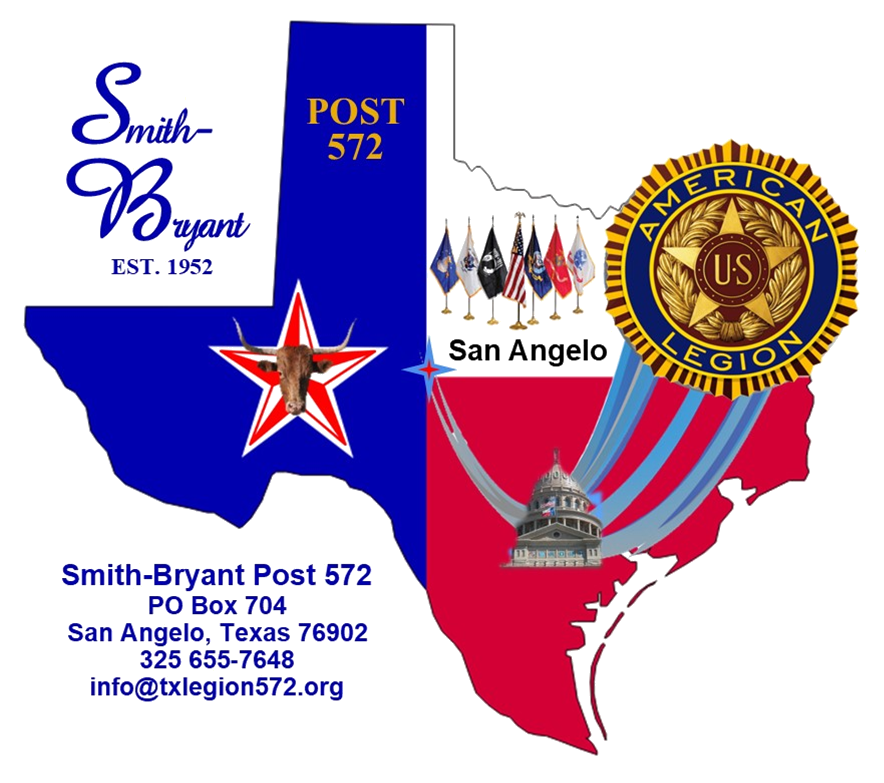